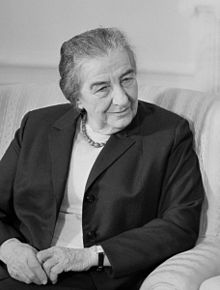 Golda Meir (born Golda Mabovitch; May 3, 1898 – December 8, 1978; married name Meyerson/Myerson between 1917–1956) was an Israeli politician, teacher, and kibbutznikit who served as the fourth prime minister of Israel from 1969 to 1974. She was the first woman to become head of government in Israel.

Born in Kyiv in Ukraine, she immigrated to Wisconsin, United States as a child with her family in 1906, and was educated there, becoming a teacher. After getting married, she and her husband emigrated to then Palestine in 1921, settling on a kibbutz. Meir was elected prime minister of Israel on March 17, 1969, after serving as labour minister and foreign minister.[5] The world’s fourth and Israel’s only woman to hold the office of prime minister, and the first in any country in the Middle East, she has been described as the “Iron Lady” of Israeli politics.

Meir was Prime Minister during the Yom Kippur War of 1973. Israel was caught off guard and suffered severe losses in the first days of the war, before recovering and defeating the invading armies. Public anger at the government caused Meir’s resignation the following year. She died in 1978 of lymphoma.