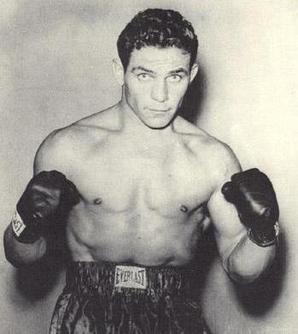 Harry Haft (also known as Herschel Haft; born Hertzko or Hertzka Haft on 28 July 1925 in Bełchatów, Poland; died 3 November 2007) was a survivor of the Auschwitz concentration camp where he boxed fellow inmates to survive. He was briefly a professional boxer in post-war Germany, and boxed as a light heavyweight in the United States from 1948–1949.

Born in Bełchatów, Poland on 28 July 1925, Haft’s father died when he was three years old. In 1939, when he was 14, Haft witnessed the invasion and German occupation of Poland. Under Nazi occupation, he ran a smuggling business with his older brother. By 1942, because he was Jewish, Haft was imprisoned in several German-Nazi slave labor camps where he was beaten and starved. Because of his strong physical stature, by 1943 an SS overseer trained him to be a boxer, and had him compete at fights to the death in front of the military personnel. The fights took place at the concentration camp Jaworzno, which was situated at a coal mine north of Auschwitz. Haft fought a total of 76 fights there. When the camp in Jaworzno was dissolved because of the advancing Soviet Red Army, thousands of its surviving inmates were sent West on death marches to Germany. Haft managed to escape from one such march in April 1945. On the run, he killed a bathing German soldier and donned his uniform. During the remaining weeks until the end of the war, he moved from village to village.

Hollywood actor Ben Foster is playing the role of Harry Haft in the recently released movie called The Survivor. To get into character, Ben subjected himself to a harsh diet until his body frame resembled that of a concentration camp inmate.