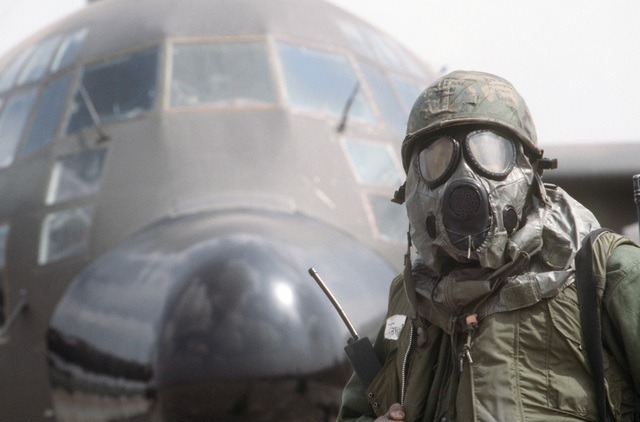 An Airman in chemical-biological warfare gear stands guard in front of a C-130E Hercules aircraft during Exercise TEAM SPIRIT '85.

The most acceptable definition of biological weapons is given by WHO which states that “biological weapons are microorganisms like virus, bacteria, fungi, or other toxins that are produced and released deliberately to cause disease and death in humans, animals or plants.”

Jewish TV Channel notes that the origin of such weapons are originally of an organic nature. it is the development of these toxins under supervised clinical trials and its subsequent release in a way meant to cause maximum human damage, which makes something of an innocent nature into a deadly biological weapon. In the first of this series, we examine the history of biological warfare. It is a disturbing trail that covers earlier mass pandemics, the recent slaughter of those who perished in concentration camps, and then more recent outbreaks including the Covid pandemic.

We raise the evidence of an academic paper that approaches the argument of whether Wuhan was part of a deliberate plot, from an angle suggesting that the Chinese Communist Party has yet to satisfactory answer long standing questions related to its bio-warfare policy. The paper presented to the scientific community was entitled ‘Genetics suggests that SARS-CoV-2 is man-made’ by Jorma Jormakka and John Fryer.

In writing this series, we point out that our sources are based on scientific papers that rely on fellow experts to appropriately decipher and distribute these findings to a lesser informed and qualified public. In trying to disseminate these scientific findings in a more watered down, palatable manner, it is pertinent to point out two essential facts. The first is to recognize our own intellectual limitations when dealing with a highly technical issue. Conversely, we uphold the public’s right to be kept informed about a subject that determines our health well being, without being blinded by the same scientific approach to keeping us informed.

Scientific evidence is generally only considered a starting point towards providing inconclusive proof about an idea formulating in the scientist’s mind. It starts with what is called a hypothesis. This is based on observations of a particular subject, and testing the findings of those observations to see if it holds up under a simple test. Once the experiment correlates the findings of the observation, a premises is then presented to support the original hypothesis. An example would be proving if the world is indeed round. The observer notes the existence on a horizon. Next, he or she might take a journey towards that horizon, only to discover a new one in the place where it was thought that the horizon ended, and so on. That observer is now entering the world of scientific discovery by proving that the horizon is part of the earth’s curvature, thereby forming a hypothesis that the world is round. What comes next will determine how much acceptance this hypothesis gets with others using scientific principles to reach a broad level of agreement. This is called a peer review, allowing others an opportunity to disprove the observer’s idea that the world is round. As this process gains momentum and a general consensus of opinion is formulated, once again based on a scientific approach, what started out a general idea now becomes accepted fact, or theory.

By understanding the over simplified explanation of what constitutes scientific ‘facts’ we can better appreciate how we can apply this understanding towards the highly technical language of what constitutes bio-warfare, as it relates to the subjects we discuss. We can bypass much of the technical arguments in favor of weighing up the opening arguments of the hypothesis, usually under the heading called the ‘abstract’, and once again at the conclusion of the paper. We can look at the qualifications of those who conducted a peer-review, or even the question of whether one was in fact done.

On a personal basis, I try to distance myself from popular attacks against the ethnic background of those providing such papers and subsequent reviews. For example, I was horrified to hear about innocent Chinese getting physically attacked in western cities based on an erroneous assumption that they were individually responsible for what may or may not have happened at Wuhan. However, I do not apply the same rationale when it comes to institutionalized acts of conduct. In carefully weighing up the arguments involved in the thorny subject of biowarfare weapons, by the very nature of their existence institutions can have a mindset that has historically led to horrific crimes against humanity. We include government led entities such as was found under Nazism, Communism, and other political regimes, sadly including western ones too. Accordingly, we raise these concerns with these thoughts in mind.

THE PAPER ABOUT COVID BEING RELATED TO AN ‘ESCAPED’ LABORATORY TRIAL

Abstract: The generally accepted theory is that SARS-CoV-2 has a natural origin as a recombination virus deriving from a bat CoV and probably from a pangolin CoV. The alternative theory that SARS-CoV-2 is a laboratory escape virus from gain-of-function research has mostly been discarded as an unfounded conspiracy theory. This article takes a look at few selected aspects of the genome of SARS-CoV-2 and the conclusions give some support to the laboratory escape theory.

The view that the SARS-CoV-2 virus has a natural origin in horseshoe bats become accepted very early in the beginning of 2020, mainly due to [1] and [2]. The alternative theory that the virus has escaped from gain-of-function research has not got much publicity, but a recent study [3], based on a survey of published articles and other sources, makes a good case for this possibility. This article takes a look at some features in the genomes of SARS-CoV-2, SARS-CoV-1, MERS, and RaTG13 that seem to support the claims in [3]. Drawing conclusions from the simple arguments in this article must be made with caution as humans have a tendency to assign an unnatural origin to everything that is not understood. Yet, the arguments in this article are very simple and something can be deduced from them. There is a need for certain re-evaluation of the natural origin theory of SARS-CoV-2.

AN ACCIDENTAL ESCAPE OR INTENTIONAL RELEASE

A document written by Chinese scientists and health officials before the pandemic in 2015 states that SARS coronaviruses were a “new era of genetic weapons” that could be “artificially manipulated into an emerging human disease virus, then weaponized and unleashed, reported Weekend Australian.

The paper titled The Unnatural Origin of SARS and New Species of Man-Made Viruses as Genetic Bioweapons suggested that World War Three would be fought with biological weapons. The document revealed that Chinese military scientists were discussing the weaponization of SARS coronaviruses five years before the Covid-19 pandemic.

It is with the above sobering thought that we wrap up the first in our coming series about the Trail of Biowarfare.