A few days before the mammoth US election, David Lev met with an outstanding war veteran and champion of Israel rights. William Langfan has long been a thorn in the side of both the PA and those which advocate placating their political agenda, regardless of what the truth might be. William is challenging high ranking advocates of peace with the PA, to seriously consider the full implications of entering negotiations without first putting the record straight on their ultimate intention of total denial of a Jewish State of Israel. 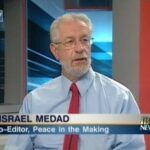 This promises to be the debate of the century! Israel Medad, a veteran Israeli settler representative, who has appeared on CNN and BBC, has agreed to be part of Williams’ debating team. There will be more to follow.