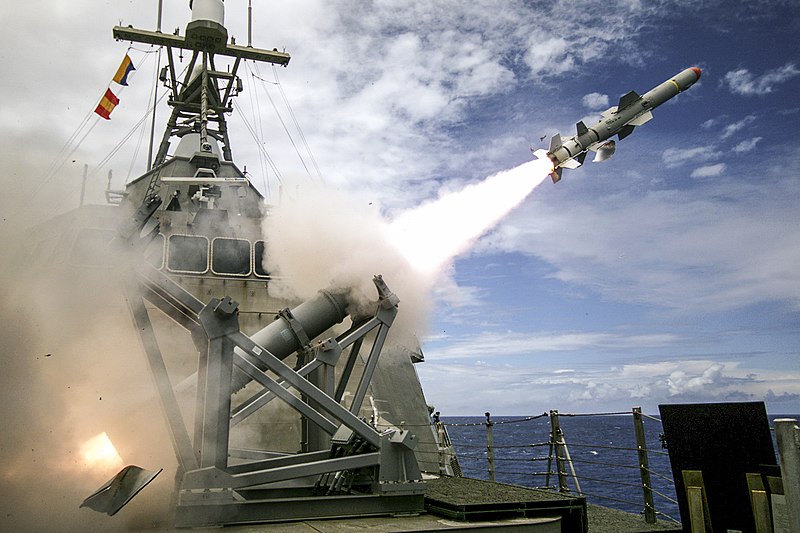 160719-N-ZZ999-112.PACIFIC OCEAN (July 19, 2016) USS Coronado (LCS 4), an Independence-variant littoral combat ship, launches the first over-the-horizon missile engagement using a Harpoon Block 1C missile. Twenty-six nations, 40 ships and submarines, more than 200 aircraft and 25,000 personnel are participating in RIMPAC from June 30 to Aug. 4, in and around the Hawaiian Islands and Southern California. The world's largest international maritime exercise, RIMPAC provides a unique training opportunity that helps participants foster and sustain the cooperative relationships that are critical to ensuring the safety of sea lanes and security on the world's oceans. RIMPAC 2016 is the 25th exercise in the series that began in 1971. (U.S. Navy photo by Lt. Bryce Hadley/Released)

Ukraine confirms that it has received shipments of Harpoon anti-ship missiles from Denmark, and self-propelled howitzers from the United States in order to counter the Russian invasion.

The weapon has been tried and tested in many battle scenarios. In 1981 and 1982 there were two accidental launches of Harpoon missiles: one by the United States Navy which caused no damage and the other by the Danish Navy, which destroyed and damaged buildings in the recreational housing area Lumsås. The Danish missile was later known as the hovsa-missile (hovsa being the Danish term for oops). In November 1980, during Operation Morvarid, Iranian missile boats attacked and sank two Iraqi Osa-class missile boats; one of the weapons used was the Harpoon missile. In 1986, the United States Navy sank at least two Libyan patrol boats in the Gulf of Sidra. Two Harpoon missiles were launched from the cruiser USS Yorktown with no confirmed results and several others from A-6 Intruder aircraft that were said to have hit their targets.Initial reports claimed that USS Yorktown scored hits on a patrol boat, but action reports indicated that the target may have been a false one and that no ships were hit by those missiles. In 1988, Harpoon missiles were used by the U.S. to sink the Iranian frigate Sahand during Operation Praying Mantis. Another was fired at the Iranian Kaman-class missile boat Joshan, but failed to strike because the fast attack craft had already been mostly sunk by RIM-66 Standard missiles. An Iranian-owned Harpoon missile was also fired at the guided missile cruiser USS Wainwright. The missile was successfully lured away by chaff.

It is not yet clear to what degree the Harpoon, which is an American product, has been directly supplied to Ukraine. Although, self-propelled howitzers, an effective battle weapon, has been deployed directly from the USA. Previous messages from Putin warned of unspecified threats to nations supplying weapons to Ukraine. It remains to be seen if the latest delivery of armaments to Ukraine could trigger a reaction from Russia against America, and even drag US forces more directly into the growing conflict.