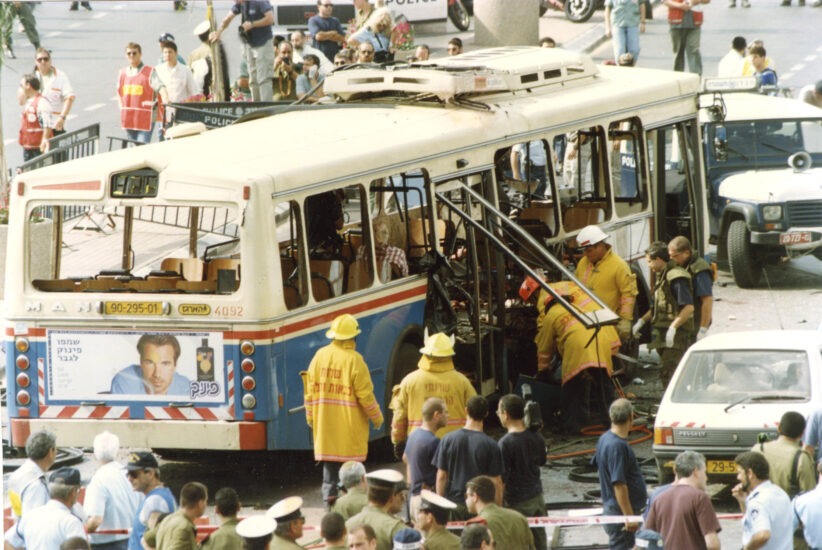 A Palestinian passenger carrying on his body explosive material with a lot of nails and other metals kill himself on a local No.20 bus which was full with passengers on their way to work killing 5 and wounded over 33, three of them critically. The explosion took place near the Dimond Exchange in Ramat Gan shortly after O8:30 in the morning. Within minutes, rescue workers evacuate the wounded to hospitals. At this state, there is no information which Palestinian group sent the suicide to fullfil the massacre. The PLO leader Yasser Arafat condemned the attack saying that such terrorist activity is an attempt to stop the peace process. Photo shows: rescue workers evacuate victims from the suicide bus bombing in Ramat Gan. July 24,1995 Copyright © IPPA 24050-001-17 Photo by Gideon Markowicz

A gunman opens fire inside a bus in Jerusalem’s Old City, wounding eight people, two of them critically. Israeli police later raid the Palestinian neighborhood of Silwan and arrest a suspect.

A gunman opened fire at a bus near Jerusalem’s Old City early Sunday, wounding eight Israelis in a suspected Palestinian attack that came a week after violence flared up between Israel and militants in Gaza, police and medics said. Two of the victims were in serious condition, including a pregnant woman with abdominal injuries and a man with gunshot wounds to the head and neck, according to Israeli hospitals treating them. Israeli police arrest suspected gunman after a shooting attack on a bus in Jerusalem’s Old City wounded at least eight people. The attack took place in the early hours of Sunday, as the bus carrying Israelis waited in a parking lot near the Western Wall, a holy prayer site for Jews.