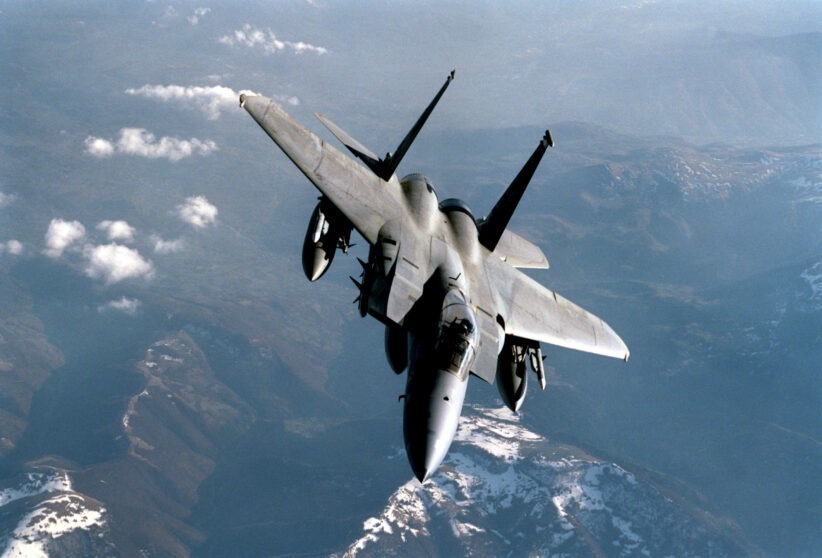 990404-F-0024F-018 An F-15C Eagle breaks away from a KC-135R Stratotanker after in-flight refueling during NATO Operation Allied Force on April 4, 1999. Operation Allied Force is the air operation against targets in the Federal Republic of Yugoslavia. The Eagle is armed with AIM-7 Sparrow missiles on the fuselage, AIM-9 Sidewinder missiles on the inboard wing pylon and AIM-120 Advanced Medium Range Air-to-Air Missiles on the outboard wing pylon. F-15C Eagles are flying Combat Air Patrol missions to maintain air superiority and protect aircraft in Allied Force. The Eagle is from the 48th Fighter Wing at RAF Lakenheath, United Kingdom. DoD photo by Tech. Sgt. Brad Fallin, U.S. Air Force. (Released)

Several incidents have taken place on the Israeli–Syrian ceasefire line during the Syrian Civil War, straining the relations between the countries. The incidents are considered a spillover of the Quneitra Governorate clashes since 2012 and later incidents between Syrian Army and the rebels, ongoing on the Syrian-controlled side of the Golan and the Golan Neutral Zone and the Hezbollah involvement in the Syrian Civil War. Since civil war broke out in Syria in 2011, Israel has carried out hundreds of air raids inside the country, targeting government positions as well as allied Iran-backed forces and Hezbollah fighters. Syrian state media say latest Israeli attacks targeted sites near Damascus and the coastal Tartous province. At least three Syrian soldiers have been killed and three others wounded in “multiple” Israeli missile attacks on Syria, according to state media.
Syrian air defence forces confronted the “aggressions” and downed some of the missiles, SANA said, citing an unnamed military source. “The aggression led to the death of three soldiers, the wounding of three others,” it reported. The attacks on Damascus were carried out from a direction southeast of the Lebanese capital, Beirut, while the attacks on Tartous came from the Mediterranean sea. In addition to the deaths, the attacks caused some “material damage,” the military source told SANA. The Israeli military declined to comment.