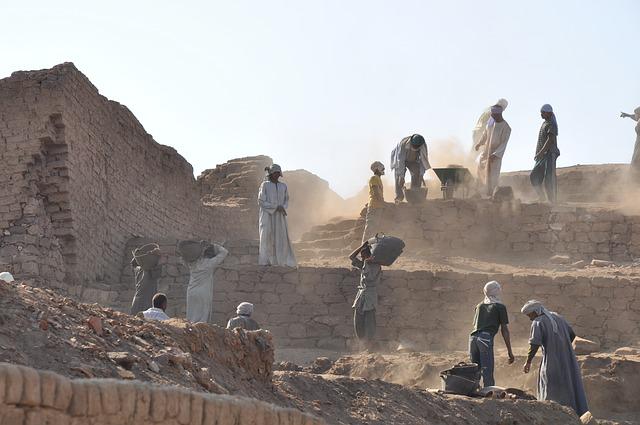 A thrilling and extraordinary discovery in the Palmachim National Park from the days of Ramses the Great (Ramesses II, who is identified with the story of the Exodus of Egypt) – during work by the Nature and Gardens Development Authority last Wednesday a tractor hit a rock, surprisingly revealing the ceiling of an ancient burial cave. Dror Citron, inspector of the Antiquities Authority, was the first to recognize the space.

The place was called archaeologists from the Antiquities Authority, who went down a ladder into an amazing space that was like frozen in time. Dozens of innocent (complete) pottery and bronze were laid in the cave; just as they were laid in their place at a funeral, some 3,300 years ago. These instruments were burial offerings – they were buried with the dead in the belief that they would use them in the afterlife. The cave was carved in the shape of a square, and in the center of its ceiling a support pillar.

Dr. Eli Yanai, Bronze Age expert at the Antiquities Authority: “This is a once in a lifetime find! It’s not everyday you discover a set of Indiana Jones – a cave with tools on the floor that have not been touched for 3,300 years. We’re talking about the late bronze age. These are the exact days of the well known king, Ramses II. The fact that the cave was signed, and not robbed in later periods, allows us, through the scientific means that exist today, to produce a lot of information from the objects and materials that survived, which are not visible, and in them organic materials. The cave can provide us with a complete picture of the burial customs of the late Bronze Age. In the cave were mostly left, dozens of pottery of different sizes and shapes. Among them, there are deep pink bowls, some of which are painted red, setting (bowls with a high foot) cooking pots, pitchers and pottery candles that contained oil for the maor”.

According to Dr. Yanai, some of the pitchers were made on the beaches of Lebanon and Syria. Along the pitchers, small hoarding tools were found – mostly pitchers and pitchers, meant to store and trade expensive materials in small quantities. These tools will be brought from the area of Zur, hunting and other port cities on the Lebanese coast. Also, many pottery were found imported from Cyprus. Instruments of these types will be imported to Israel in large quantities, and there were common side objects for burial.

Next to the pottery, in the cave were found arrows or bronze spears. According to their position, they were data in trash made of organic matter that didn’t survive. The cave findings date back to the 13th century to the Passover (Late Bronze Age 2nd B)”, in this period – in the days of the Egyptian dynasty, the days of Ramses II, took place in Israel under Egyptian administration, which allowed safe conditions for large-scale trade. These economic and social processes, are well reflected in the cave’s findings: the pottery brought from a Mugrit in the north, from Cyprus and the nearby coastal caves – and in Rashan Jaffa, Ashdod, Ashkelon, Gaza and Tel Ajol, indicate that the residents of Yavne-Yam (Palmachim Beach), have integrated into the urban trade that took place along the country’s beaches.

In the short period of time before sealing the opening, and despite no protective measures, a person or more entered a cave that slaughtered at several points. The absolute majority of the tools remained in place, but it appears that a number of items were stolen. The circumstances of the case are being investigated.
According to Eli Escozido, director of the Antiques Authority and his wife Shurki, director of the Nature and Gardens Authority, “you discovered in the Palmachim National Park is particularly unique and exciting. Rumors of the cave’s discovery have passed through the scientific world as a barbed fire, and we are receiving many inquiries from researchers to please join the expected archaeological excavation. Unfortunately, in the short period of time before sealing the cave, and despite its protection, a number of archaeological items were stolen from the cave, and the subject is under investigation. In the coming days, we will consolidate together the way to conduct the required research and conservation at the unique site, which is a celebration of the archaeological world and ancient history of the land of Israel