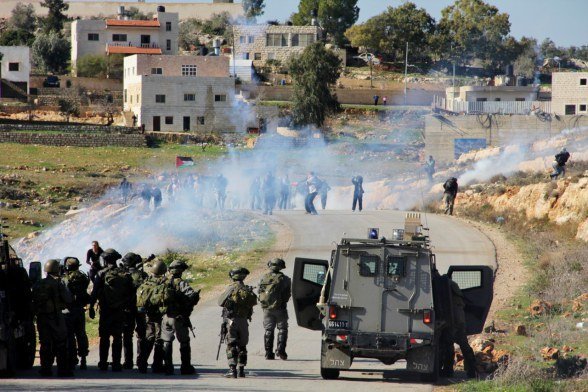 Lt. Col (Retired) Meir Indor and Israel Prime Minister may publicly appear to be at odds with each other when it comes to US brokered peace negotiations, but the truth is far different. Their relationship is symbiotic, whereby at the best of times mutual benefit is attained through a quiet understanding of each other’s needs, with the welfare of Israel’s security foremost in mind. In fighting against terrorism, their lessons can benefit mankind, Jews, Arabs, Christians and every other peace loving person included.

Israel periodically faces international demands for concessions, which includes the release of convicted terrorists, often for the mere purpose of maintaining a dialogue between opposing sides. While peaceful dialogue is an obvious benefit for all concerned, sometimes the price of just being able to talk to each other can exact a hefty cost.

Strike Back – For Peace, is a documentary of global relevance in the fight against world terrorism. It is being produced and distributed through JTVC. It will feature Almagor’s famed struggle against terrorism in Israel, as well as other international anti-terrorism efforts, initiated by actual victims themselves. It is guaranteed to raise one’s pride in defending our civilized existence, rather than being held mental hostage to terrorism.

When demands to release terrorists is granted, only to be met by further acts of terrorism by those released, then more than questions are asked. The temperature of Israelis runs high, sometimes leading to revenge attacks against innocent Arabs, as what happened in Jerusalem against a young man just a year ago. This in return leads to an increase in incitement to kill more Jews, sadly a call that doesn’t always need justification. And so the cycle continues and blood is shed in place of words.

Is there a way to continue peaceful dialogue without exacting such a high price, for all parties concerned? Strike Back – For Peace, is a striking documentary being produced, with all profit going to victims of terror, to enable them to feel that their voice is still heard, rather than more victims’s blood being further spilled. First let’s take a look at their background. Their history runs parallel with the failed efforts of previous peace talks.

1985, Prime Minister Shimon Peres and Ahmed Jibril, head of the Popular Front for the Liberation of Palestine, concluded the Jibril Deal. A total of 1,150 terrorists were freed from Israeli prisons in exchange for three IDF soldiers who had been kidnapped during the First Lebanon War.

The deal aroused a storm of controversy in Israel, especially due to the stark asymmetry between the price paid and the few released Israeli captives. Aggravating the asymmetry was that these were a small minority of the captives and MIA’s for whose release Israel had bargained.

The disastrous consequences of the price paid began to become clear only three years later, when many of the freed terrorists became the leaders of the first “intifada” 238 terrorists freed in the Jibril Deal, 48 % returned to terrorism and were recaptured by Israeli forces!

In 1986, in the wake of the Jibril Deal, the Almagor Terror Victims Association was founded. Since then, Almagor has played a critical role in its active opposition to the release of terrorists from prison.

Almagor advocates for terror victims’ rights. It is long accepted that a crime victim, a person who was caused injury by a criminal act, is entitled to justice; punishment of the criminal, the psychological closure that comes with punishment, laying down the law in its full force. Terror victims, who suffer their entire lives from uniquely evil crimes that hurt both individuals and the public, also are entitled to justice.

This is not an issue only unique to terrorism in Israel. Every day around the world, headlines are filled with horrific accounts of savage attacks against innocent civilians. In fact, one could even define violent abuse in many situations as a terrorist act. Therefore the obvious question to raise, is whether any act of terrorism can be justified at all? The answer might lie in determining the status of the victim, and it then becomes clearer that any individual engaged in an innocent act should not expect to become the victim of a terrorism.

Strike Back is accordingly a documentary movie not to be missed!

David Lev, its producer, is no stranger to the movie and entertainment industry. His creative talent has been featured in the classic Israeli cinematic rendition of the ‘Tales of Rebbe Nachmun’ produced by Hollywood’s own Zvi Fishman. The movie recounts four of the famous rabbi’s moving stories. Israeli award winning actor Yehuda Barkan, stars in one of the stories about the king’s son who thinks he’s a turkey. David plays a key supporting role besides two stories that feature the popular Israeli movie star.

One of the four stories relates the tale of a poor peasant who dreams of finding buried treasure under a bridge. After an exhausting journey when the peasant runs for many miles to reach that destination, he finds the bridge is patrolled by a burly police officer. The concerned peasant is tries to explain about his dream, hoping that the police officer might agree to let him search there, maybe on condition of sharing the treasure with him? But there is a surprise in store, which would be spoil the end of the movie by telling it! But it is no surprise to mention that David Lev is the star actor in that story, playing the part of the peasant to perfection.

David is currently engaged in an exciting documentary movie project with being produced by Trevor   Bannister, and directed by James D. Long. Trevor’s work has been featured in the Cannes Film Festival, London’s alternative theatrical circuit, and even through the Beatles’ publishing empire. Jim recently produced a feature length thriller movie. Their project is a series of episodes entitled ‘Trail of the Ark’ and promises to deliver an exciting and educational experience.

Of equal importance,  David has a background in military security and continues to participate in related activities today. It was his concern for the plight of non-combatants that stimulated his interest in the plight of terror victims. In this respect he previously led a mission of terror victims to the UK to meet leading government officials there. That trip, which was made with assistance from the Israel Prime Minister’s  office, was a great success and helped to undermine the status of certain terrorist organizations. David will also be discussing this documentary, and its vital mission, on his regular radio show on Israel National News.

David Lev will be returning to the States this December. His previous campaign in 2015, helped to raise support for these unfortunate victims of terror. His next visit brings to light a whole new dimension related to the very heart of the Middle East conflict.

You can contact David here and play an important role in this important undertaking.

Trail of the Ark